Imagine that you are at work, and you witness a colleague repeatedly bullying another colleague. What would you do? While many of us like to think that we would interfere to stop it, surveys show that most employees who witness bullying situations, known as bystanders, do not respond in ways that would help the victim.

Instead, up to 60% of employees in some places report doing nothing when witnessing bullying. But why is this the case and what consequences does it have? Our recent research gives important clues.

Workplace bullying occurs when an employee is subjected to repeated behaviours that harass, exclude, or negatively affect someone’s work. This may range from obvious acts of physical violence to more ambiguous behaviour, such as mocking, insulting or socially excluding someone.

Bullying can seriously affect victims’ mental and physical health, with extreme cases leading to self-harm or suicide. On average, workplace bullying affects around 15% of people, though some sectors, such as healthcare and higher education, report higher rates.

The impact of doing nothing

Workplace bullying has traditionally been seen as an issue just between the victim and bully – and dealt with accordingly. But bullying often occurs in front of others. Surveys show up to 83% of employees in some organisations report witnessing bullying at work.

This is troubling. Witnessing bullying may harm bystanders’ own wellbeing, stimulating fear of how they might be treated in the future.

But how bystanders respond can either help or worsen the situation for victims. In our recent study, we asked employees at a large university to answer questions about their experiences of bullying, as a victim or a bystander.

We showed bullying victims suffered less damage when they had helpful bystanders who actively intervened. Conversely, victims in groups with bystanders who did nothing experienced greater detriments.

We suggest that this is because victims in these situations must not only deal with bullying, but also understanding why others did not respond, which is more added stress. It seems to us bystanders are key in helping create an anti-bullying workplace culture.

Researchers have proposed that bystander responses to workplace bullying can be categorised in two ways: active versus passive, and constructive versus destructive. The former describes how proactive the response is in addressing the bullying situation, while the latter shows whether the response is intended to improve or worsen the situation for targets. 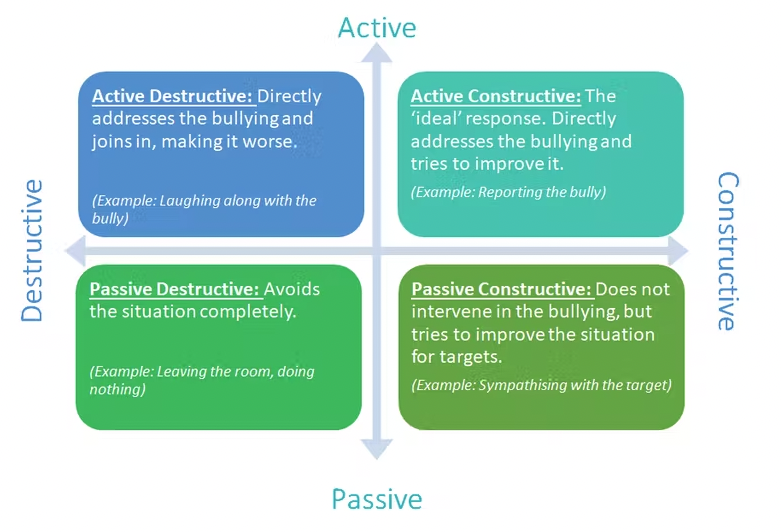 Passive-destructive bystanders, on the other hand, typically avoid the bullying and “do nothing”. While this may sound benign to some, targets may view passivity as condoning the bully’s actions. Finally, active destructive-bystanders actively worsen the bullying situation, for example, by openly siding with the bully or setting up situations where the bully can pick on people. They effectively become secondary bullies.

The psychology behind bystanding

Why do so many people fail to intervene when witnessing something they know is wrong or harmful? The most famous theory to explain the phenomenon, known as the bystander effect, was inspired by the murder of Kitty Genovese. Kitty was a young woman in 1960s New York who was stabbed to death outside her apartment building while 38 residents watched from their windows. Initially, it was reported that not a single person intervened or called the police, showing passive-destructive responses – though this story and the theory itself have been challenged.

That said, the effect seems to hold in more ambiguous situations, such as bullying, that don’t amount to a medical emergency. The bystander effect explains their actions by proposing that individuals are less likely to help when there are other people present. This makes us feel less personally responsible to act, especially in ambiguous situations.

In another recent paper, we tried to delve deeper into the psychological processes underlying bystander behaviour. Bullying is often subjective, with people interpreting the same situation differently. So, we were interested in understanding what interpretations lead to active-constructive responses, which are the most helpful.

For active-constructive responses to occur, employees must perceive that the incident is severe enough to warrant intervention. This can be ambiguous – is that offhand remark just a joke or something more?

Next, employees must perceive that the victim does not deserve what is happening to them. Work relationships are complex and in certain cases, such as when group performance is key, employees may not approve of others making mistakes or inconveniencing them and may perceive mistreatment as justified.

Finally, employees must perceive that they are able to intervene effectively. There are many cases where employees wish to act but don’t feel able to, such as if the bully is a supervisor, or if previous attempts to intervene have failed.

While there is no one-size-fits-all solution to encourage bystander intervention, there are things you can try to help you better understand a target’s situation and, hopefully, become an active constructive bystander. Research suggests that perspective taking, or trying to see things through another point of view, can be beneficial.

Organisations have a key part to play in stopping bullying and, ideally, should have anti-bullying policies that are easily accessible by employees. These policies should clearly define what bullying is and have transparent, confidential processes for reporting incidents that are either directly experienced or witnessed.

Policies and anti-bullying initiatives should have buy-in from senior management. This would ultimately help employees feel safe in speaking out.

Importantly, organisations should try to find the root causes of bullying and if there is anything they can change to reduce it. For example, high workload and poor communication may contribute to a bullying culture.

Organisations whose members can reflect on problem areas can then take appropriate actions to tackle them. Not only could this reduce bullying, but it can also improve overall workplace wellbeing.