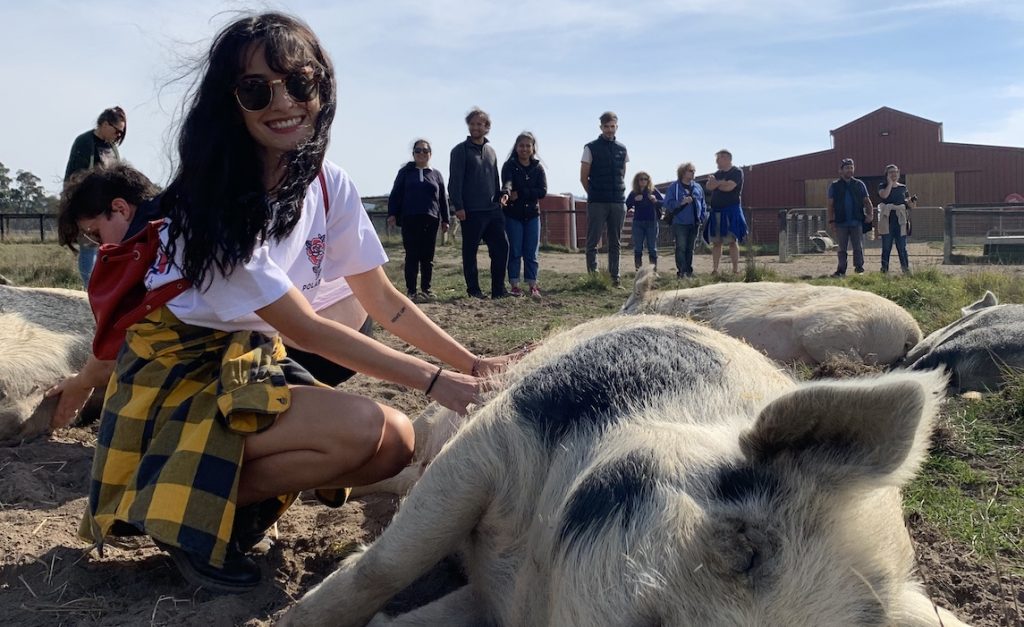 People find amazing jobs on EthicalJobs.com.au every day. This is part of a series of articles that go behind the scenes to meet some of the people and organisations finding each other through EthicalJobs.com.au.

Today’s story is from Lydia Kiternas, who found her role as Supporter Liaison at Animals Australia on EthicalJobs.com.au.

Animals Australia is Australia’s leading animal protection organisation. Their investigations and campaigns are recognised the world over.

Starting out with work

My very first job was as a cashier at a local supermarket when I was 16 or 17. I remember being so nervous when I went to hand in my resumé – a couple of friends who were already working there had to physically shove me through the door of the owner’s office. I was extremely shy back then, and I ended up working there for several years through school and university, because I couldn’t bear the thought of interviewing elsewhere. I learnt a lot about customer service, forged life-long friendships, and left with some great stories.

After school, I studied a Bachelor of Arts at university and I was undeniably completely lost as to what I wanted to pursue. I ended up piecing together a double major in Anthropology, and Media, Culture, and Communications. On the Anthropology side, I had an incredible professor for evolutionary studies, and I was lucky enough to do some cultural units overseas. I feel as though this field guided me to where I am today, as it fuelled my curiosity about the world, and the interconnectedness of people, non-human animals, and the planet.

I graduated bright-eyed and bushy-tailed, thinking my Bachelor was enough to land a job in the UN and change the world (hilarious). After months of writing truly underwhelming cover letters and applications for NGOs, I eventually landed a job in media through a connection. I was a Campaign Planner for some exciting brands, and spent a few years working with a passionate boss who was a phenomenal teacher and mentor – she taught me how to plan and execute campaigns and most importantly, how to harness my strengths. My team kept me going, but I felt like there was something missing – I knew I wanted to be channelling my energy into making the world a better place (or more specifically, to saving animals), I just didn’t know how. I started volunteering with the dedicated team at Animal Liberation (NSW), and I quickly realised how much fulfilment I got from helping them, even in the tiniest of ways, in their mission to improve the lives of animals.

Animals Australia works to create a world where kindness and respect extend to all living beings. The goals of the organisation revolve around achieving meaningful and long-lasting change for animals, through investigations, advocating for legal and corporate change, and raising awareness so that consumers can make informed choices that align with their values. We advocate for all animals, and in particular, those trapped in our current food system who face an unnaturally short lifespan confined to a cage, or those being sent overseas on live export ships.

I am a Supporter Liaison in a small, legendary team that is the first point of contact for incoming phone and email queries. I came onboard a few months ago, and I am still pinching myself because I think I have scored one of the best jobs in the organisation – possibly even the world. People who share our vision of a world where animals are free from harm are constantly reaching out to us – wanting to help in one way or another, wishing to contribute to our campaigns, or seeking advice on cruelty-free living and plant-based eating. And with ever-changing factors at play, such as key cultural events in the calendar, campaign development announcements, legal changes, headlines in the news, and new plant-based alternatives popping up in stores, no two days ever feel the same!

Given that I am still so new to the role, I am still finding my feet – but I can say that I think I’ve had, at the very least, one inspiring conversation each day that I have been here. People get in touch to thank us for shining a light on legal and common practises that are causing immense animal suffering, and say things like, “I saw your live export exposé ten years ago, and I never ate animals again”. I get to chat to these amazing people, and pass their praise on to my colleagues. The world of animal rights can often feel disheartening and challenging, but being part of an organisation and supporter-community that is striving for a kinder future for animals is incredibly rewarding.

Working for a better world

I first came across EthicalJobs.com.au when I left media earlier this year (I think it was my forth or fifth attempt to break out) and the site was recommended to me by my sister and a few friends who knew I was in search of a role, or an organisation, within the realm of animal rights. EthicalJobs.com.au became my go-to during my job hunt, because it was really user-friendly, simple to filter preferences and set up job alert emails, and the types of organisations that were advertising positions aligned with my values and aspirations. The alerts spared me from wasting time stuck in an endless scroll of job ads that weren’t relevant to me – I would just open my laptop in the morning, coffee in hand, and go straight to my alert email. That didn’t last too long though!

The moment I saw the Supporter Liaison role in my EthicalJobs.com.au job alert email, my eyes lit up. The organisation aligned with my values and I admired their approach to animal rights. The role was a chance to do what I already did (talk about animals all day), and what I aspired to do (engage with others who wanted to make a difference). The beautiful thing about this role, is that its focus is on empowering people to make positive change, in a world where we animal lovers and environmentalists can often feel powerless. I knew how desperately I wanted the role, and I think I spent the entire day on my application and forgot to do normal and essential things like drink water or blink.

The feeling of seeing change you’ve had a part in creating is pretty special. When you spend such a large portion of your time working, I think it’s invaluable to enjoy what you’re working on, or working to achieve. My colleagues are some of the smartest people that I’ve been lucky enough to be in a room (or a Zoom) with, and they are driven purely by compassion. Hearing the leadership team speak about the lives that have been saved, or the lives that will be saved by our plans for the year ahead, gives me a sense of hope that I’ve never really felt before – I even smile on my morning commute to work these days, and I am the exact opposite of a “morning person”.

My little piece of advice (which I wish I could’ve given myself after university), is to take the time to put your heart and soul into your CV and cover letter. Hiring managers might be filtering through applications for hours and you need to make them stop at your extra special piece of A4 paper amongst the other 274. My header photo for this application was of me in hi-vis with the devoted duck rescue group at the 2019 duck shooting season in Victoria, and my opening paragraph explained why, if I was a non-human animal, I’d be a duck. I don’t necessarily recommend doing exactly that, as it might be a bit random in other contexts, but it worked! And as for content, as someone who really struggled to “sell myself”, my dad gave me a piece of top-shelf dad-wisdom – talk about the praise others have given you instead. I guess what I am saying is that EthicalJobs.com.au + ducks + dad wisdom = landing your dream job.